1. From Megillat Taanit, section on Kislev (written by the School of Shammai)

On the twenty-fifth begin the eight days of Hanukkah during which funeral eulogies are not allowed.

1 Maccabees is our earliest source of the Hanukkah story (earlier than text 1). It comes from a few decades after the event. Hanukkah here is an eight day festival modeled on Sukkot. Rededication of the Temple has the same date as profanation three years before. Jonathan Goldstein in his edition of 1 Maccabees dates Kislev in 164 BCE in October, implying six years intercalation had been missed. Peter Schick and I have written about the eclipse of the moon visible over Jerusalem on October 3rd of that year, coinciding with an appearance of Halley’s Comet.

52 Early in the morning on the twenty-fifth day of the ninth month, which is the month of Chislev, in the one hundred and forty-eighth year, 53 they rose and offered sacrifice, as the law directs, on the new altar of burnt-offering that they had built.  54 At the very season and on the very day that the Gentiles had profaned it, it was dedicated with songs and harps and lutes and cymbals. 55 All the people fell on their faces and worshipped and blessed Heaven, who had prospered them. 56 So they celebrated the dedication of the altar for eight days. 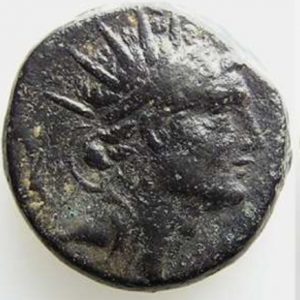 2 Maccabees suggests the profanation of the altar may have coincided with a festival, such as the “monthly celebration of the king’s birthday.”
“Coins from this period carry on their obverse a portrait of Antiochus IV with a radiate head visually alluding to the sun god Helios and representing Antiochus claim to be theos epiphanies or “god manifest”. (Anathea Portier-Young, Apocalypse Against Empire: Theologies of Resistance in Early Judaism, 2011, p. 190)

3 Harsh and utterly grievous was the onslaught of evil. 4 For the temple was filled with debauchery and revelling by the Gentiles, who dallied with prostitutes and had intercourse with women within the sacred precincts, and besides brought in things for sacrifice that were unfit. 5 The altar was covered with abominable offerings that were forbidden by the laws. 6 People could neither keep the sabbath, nor observe the festivals of their ancestors, nor so much as confess themselves to be Jews. 7 On the monthly celebration of the king’s birthday, the Jews were taken, under bitter constraint, to partake of the sacrifices.

4.   The Syrian God Beelshamen (centre), found near the Temple at Palmyra

Beelshamen (Baal-Shamin), also known as Shamayim “lord of the heavens”, was a supreme deity and the sky god of pre-Islamic Palmyra in ancient Syria. “Beel” is one form of Baal, a Semitic title for “Lord”, equivalent to Bel in Mesopotamia.

Beelshamen here forms a triad with the lunar god Aglibol and the sun god Malakbel (“Messenger of the Lord”). Beelshamen is equated with Zeus Helios.

There are two schools of thought about how Xmas came to be on December 25th. The most well known theory is that the date was copied from a pagan festival. The alternative theory, that the date was arrived at by calculation, is less well known but is convincingly argued by Andrew McGowan’in his article “How December 25 Became Christmas” which originally appeared in Bible Review, December 2002. The calculation theory begins from this account, and argues that Zechariah was High Priest and the visitation came to him in the Temple on Yom Kippur which that year was September 24th. That made the annunciation to Mary six months later on March 24th and Jesus birth on December 25th. Jesus’ death in this calculation was also on March 24th, so from conception to death a whole number of years. Death date originally considered more significant than birth date. Cf Midrashim about patriarchs dying on their birthdays.
5 In the days of King Herod of Judea, there was a priest named Zechariah, who belonged to the priestly order of Abijah. His wife was a descendant of Aaron, and her name was Elizabeth. 6 Both of them were righteous before God, living blamelessly according to all the commandments and regulations of the Lord. 7 But they had no children, because Elizabeth was barren, and both were getting on in years. 8 Once when he was serving as priest before God and his section was on duty, 9 he was chosen by lot, according to the custom of the priesthood, to enter the sanctuary of the Lord and offer incense. 10 Now at the time of the incense-offering, the whole assembly of the people was praying outside. 11Then there appeared to him an angel of the Lord, standing at the right side of the altar of incense….
2 4 After those days his wife Elizabeth conceived, and for five months she remained in seclusion. She said, 25 ‘This is what the Lord has done for me when he looked favourably on me and took away the disgrace I have endured among my people.’
26 In the sixth month the angel Gabriel was sent by God to a town in Galilee called Nazareth, 27 to a virgin engaged to a man whose name was Joseph, of the house of David. The virgin’s name was Mary.

In the Julian calendar as used in Rome from  44 BCE , the winter solstice was originally December 25th, though because the calendar was not accurate, the date slipped.  The Council of Nicaea in 325 CEW set the date for the spring equinox at March 21st, which meant the winter solstice would be December 21st. Nevertheless, the old equinox date of March 25th was often celebrated as New Year. When 11 days were omitted in Britain in 1752 to correct the calendar, the start of the tax year was moved  from March 25th to April 6th, where it remains.

At the time of Winter Solstice, the births of so many gods and heroes were celebrated—including Apollo, Attis, Baal, Dionysus, Helios, Hercules, Perseus, Theseus and Mithra—that in the third century, Emperor Aurelian established a single festival for all of them on December 25 and called it the Birthday of the Unconquered Sun (Sol Invictus).

The provisions of the 313 Edict of Milan ..abolished sanctions against those who followed the Christian faith….Constantine’s institution in 321 of the weekly Day of the Sun as a recognised civil holiday should be set against this background.

The two listings from the Chronography of 354 are the earliest clear evidence of our Western date for Christmas.

Consuls Caesar (Augustus) and Paul (L. Aemilius Paulus). While these were consuls the Lord Jesus Christ is born eight days before the Kalends of January, a Friday, the 15th day from the new moon.

This part of the calendar is thought to copy an earlier one from the year 336. The feast of Sol Invictus is also listed in the calendar for Dec 25.
VIII kal. Ian. natus Christus in Betleem Iudeae.

On the eighth day before the Kalends of January Christ born in Bethlehem Judea.

The Kalends in Rome was on the first of the month, but the Talmud’s account imagines it running from the 25th December to January 1st, which is now Christmas to New Year. The eight days of Hanukkah also run from one month to the next, and this is a very unusual feature of both the Christian and the Jewish octaves. We have here a 17 day period in total (8+1+8) ending on Jan 1st.

MISHNAH These are the festivals of the gentiles, the Kalends, the Saturnalia, the Kratesis (festival of Sovereignty). GEMARA. Said Rav Hanan bar Rava: The Kalends is kept on the eight days following the [winter] solstice, and Saturnalia on the eight days preceding the solstice. As a mnemonic take the verse, Thou hast beset me behind and before. Our Rabbis taught: When Adam saw the day getting gradually shorter, he said, ‘Woe is me, perhaps because I have sinned, the world around me is being darkened and returning to its state of chaos and confusion; this then is the kind of death to which I have been sentenced from Heaven!’ So he began keeping an eight days’ fast. But as he observed the winter solstice and noted the day getting increasingly longer, he said, ‘This is the world’s course’, and he set forth to keep an eight days’ festivity. In the following year he appointed both as festivals. Now, he fixed them for the sake of Heaven, but the [heathens] appointed them for the sake of idolatry.

Our Rabbis taught: The precept of Hanukkah [demands] one light for a man and his household; the zealous [kindle] a light for each member [of the household]; and the extremely zealous — Beit Shammai hold: On the first day eight lights are lit and thereafter they are gradually reduced; but Beit Hillel say: On the first day one is lit and thereafter they are progressively increased.

I wrote this book back in 1994, before I was aware of all the sources quoted on this page. In spite of that, I still stand by what I have quoted here.

The date of Hanukkah comes from the date of the rededication of the Temple by the Maccabees, which is described as being on the 25th Kislev 164 BCE, three years to the day after its desecration by Syrian Troops. Some think there was a real festival on this date to the Syrian Deity Baal Shamin, and that is why the soldiers chose this date to defile the altar. Jonathan Goldstein has argued that the choice of 25th Kislev for the rededication was not just a coincidence. The Maccabees had been in control of the Temple for months, but had deliberately waited for a miraculous divine act of restoration. Only when this failed to come did they choose the third anniversary of the desecration to celebrate the completion of the restoration. Unfortunately for Goldstein’s theory, it now appears that a miracle did occur! Although it was hardly a divine act of restoration of the Temple, it seems that Halley’s comet was visible in September to mid November of 164 BCE, and again early in December. Its first appearance was particularly startling on the evening of October 3rd, when its brightness was emphasised by a total eclipse of the full moon: the moon would have risen darkened and probably blood red. This unusual event was closely followed by the death of the hated King Antiochus IV Epiphanes. The comet may be alluded to in Daniel 12:3: perhaps it was this celestial fire which led to the manner of the Temple Dedication, which centred around the lighting of the menorah. But however one explains it, the fact remains that the dedication on the 25th Kislev was the precise date on which the altar had been desecrated three years earlier. In deciding to celebrate for eight days, the Maccabees modelled themselves on Moses’ dedication of the Tabernacle and Solomon’s dedication of the first Temple (Leviticus 8:36 – 9:1 and 1 Kings 8:66).

The date of Christmas is also no coincidence. It is known to have nothing to do with the story of the birth of Jesus in the Christian Scriptures, but to come from a Roman festival. There is some evidence that Roman troops in later centuries celebrated this same festival to Baal Shamin, so Christmas could be based on the same date.

One thought on “CHRISMUKAH/CHRISNUKAH/CHANUMAS: SOURCES FOR THE DATES OF HANUKKAH AND CHRISTMAS”