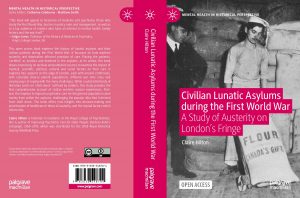 Above is the cover for Claire’s new book, which will be published in print and free online later this year. It is based on archive records from three London psychiatric hospitals and covers all aspects of care, policy, problems and life in those institutions.

A year ago, Michael was beginning a long recovery from a cancer operation, our house renovation was all but finished, and life was beginning to return to normal. On 18th September we fixed the mezuzah to our brand new front door post. We went to London Open House and somehow Michael made it to Newcastle to lead their Rosh Hashanah services. Jacob visited from San Francisco for the festivals, we had a brand new sukkah as well as a new kitchen, and Jacob and Benjamin even got out their old accordions for some impromptu duets. This family photo of us breaking the fast with our Kessler cousins sums up the mood: 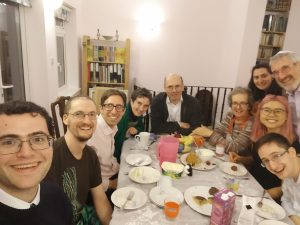 The next day, Michael met Jacob and Samuel at the sukkah in the Trafalgar Square which was part of the very peaceful Extinction Rebellion protests. Art exhibitions, Limmud, teaching and learning – there was always a lot going on.  Claire ran a witness seminar in October for people involved in psychiatry in the 1960s, Benjamin started his first civil service job, in the Dept for International Trade, Samuel continued working in Parliament, Jacob for Open AI in San Francisco, and we all thought we were building a better world. As recently as February, Michael was in Germany for the Jewish-Christian-Muslim week there, and in March there was Jewish Book Week and Purim, the last events before the lockdown.

Sadly, the lockdown came too late to save the North-West London Jewish community from a lot of heartache. Many were seriously ill, and Michael’s colleague, Rabbi Neil Kraft, died of a Covid-19 infection. On 19th March, Benjamin, Samuel and his girlfriend Claire Yip moved in with us, and stayed until 19th August. We were so fortunate to be able to make full use of our new kitchen and three showers. We had not stocked up, and shopping on line was complicated at first, but we eventually managed to get everything five hungry adults who are not going out need. Our car was out of action and we were unable to get it repaired until July, but then we started weekly Sunday morning walks in Hertfordshire, which still continue. Amazing how rural it can be on London’s doorstep.

We were very fortunate to have a wifi that managed (just) to cope with five of us working online at the same time, and even more fortunate that all our activities were able to continue. The number of emails doubled as everyone tried to make new arrangements for everything. Claire was able to pursue her publications and her history, and Samuel’s attempts to point out government short-sightedness continued tirelessly – he was asking back in 2019 why pandemic planning did not appear in party election manifestos. Benjamin found himself working on how to attract overseas students for 20/21, and Michael helping colleagues with some very difficult and emotional discussions about safety at funerals. As so many of us know from the lockdown, each day seems to pass so slowly, and the weeks and months so quickly. With 100 meals a week being prepared in our kitchen, there was always lots to do around the house and outside in the garden — it was really fortunate that we did not move back in 2018 to a smaller place. This year, being near the shops and public transport has become meaningless, but having a larger house with a garden, pleasant views and good neighbours has been amazing. As you can see from our card, Claire has taken a course in Arabic calligraphy; our lessons have resumed after a maternity break for our teacher Nazmina. We try to be realistic about the future, recognising that with positive tests for the virus once again increasing exponentially in London, that at some point there will be further restrictions. We wish you all a very safe a healthy New Year, with new opportunities in our rapidly changing world.

RCPsych witness seminar transcript : Psychiatric hospitals in the UK in the 1960s